SA funeral parlours are launching their own cellphone network

Home NewsSA funeral parlours are launching their own cellphone network

A group of funeral parlour owners is launching its own cellphone network, Sakeng Mobile, in August – and some of its new deals are cheaper than Vodacom.

The funeral parlour owners are the founders of Sakeng Emporium, an online marketplace that, when it fully launches, will reward members with discounts depending on how many are on the platform. The platform aims to use its bulk negotiating power to reduce the price of goods, which it then passes on to members in the form of vouchers and discounts. The funeral parlour operators may have founded the marketplace but Sakeng Emporium is actually majority-owned by its members.

One of Sakeng Emporium’s first projects is Sakeng Mobile, which works on a similar principle: the more members the network has, the cheaper the rates get as the company is able to negotiate better deals with its partners, such as Cell C, on whose network it roams.

Right now, those rates are pretty good. You can get a 50Mb data bundle on Sakeng Mobile for R9.50. The same bundle costs R12 on Vodacom prepaid. However, 500Mb will cost you R88, while it’s R79 on Vodacom.

According to Leopold Malan, chief technical officer of Sakeng, the owners of the funeral parlours wanted to figure out ways to provide value-added services to their clients.

They came up with Sakeng Emporium. “They wanted to do something for their clients, to find a way to reward their loyalty.”

Sakas are awarded just by interacting with Sakeng Emporium. “That’s something anyone can do. It’s not linked to how much money you can spend,” says Malan.

Sakeng Emporium owns Sakeng Mobile, which means you can own part of your very own cellphone network.

According to Malan, the various funeral parlours are advertising Sakeng Emporium and Mobile to their clients in the townships. They want to turn the emporium into a large e-commerce website for local communities.

“Anyone will be able to join as a retailer,” says Malan. “We’re looking at spaza shops, hairdressers, the bicycle store on the corner.” The stores can then offer discounts to Sakeng members. 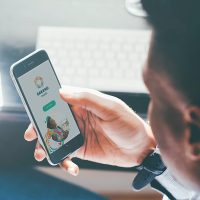